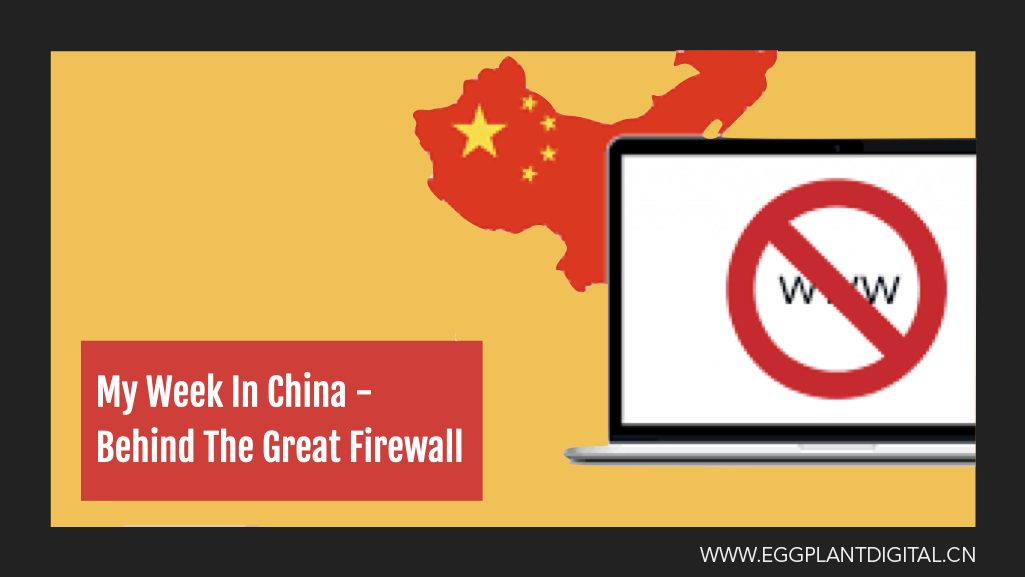 I’ve been in and out the PRC for the last couple of years. My use of the internet has now become like your average non-PRC resident. I use Facebook, Twitter, Instagram, Dropbox, and a host of Google services without thinking twice – and certainly with no need for a VPN.

The Challenge: Getting Though With No VPN

I spent a few days in Shanghai combining business with pleasure – a few meetings, plus a friend was working at the Chinese Grand Prix and had never visited the PRC, so I opted to show him around a bit.

For the first time, digitally, I felt like a regular foreigner in China (who  has a need for blocked services).
Here’s the story of how it went inside the “great” firewall of China.

As you probably know, you can jump the Chinese firewall. I was only going to be here for less than a week, I thought I’d just cope without a VPN. As a security blanket, I decided to open an outlook e-mail account which is not blocked in China. Interestingly, my phone still received emails on my Gmail account, but couldn’t send them. For the record, inside China I did receive incoming notifications, you just can’t connect to blocked servers from inside the PRC.

Incidentally, my iPhone Gmail account worked fine the whole time while using cloudmagic as the app on my phone (which I wholeheartedly recommend as the most useful iPhone e-mail app I’ve tried so far.)

So at the first hurdle, it seems that life behind the firewall wasn’t as depriving as I had expected.

How Do You Solve The Problem?

So, usually I would be running my life using a selection of apps, such as Facebook, Gmail, WhatsApp, Paypal, Skype, Uber and Google maps, oh and Slack (a personal favourite).

So how do I cope? Well, on arrival in China you can delete all these apps, and replace them with one: WeChat

As with many things in modern China, the original template for WeChat was “borrowed” from the Japanese software called Line. However, since taking a grip in China, WeChat has become another animal completely. It now serves most Chinese urban dwellers on a daily basis with over 650million penetration inside the PRC.

People in China don’t exchange e-mails or phone numbers anymore. They ask for a WeChat ID.

As a broadcast platform, WEIBO has suffered from Chinese censorship as the commenting on daily news events isn’t always to the government’s liking. This means posts get deleted or accounts disappear – not good for growth rates!

WeChat doesn’t publicly broadcast. It’s most shared element is it’s “moments” feature, which is akin to Facebook’s wall – visible only by contacts/friends. This has allowed it to rocket to the becoming the most mainstream app in China today.

So I arranged to meet up with a friend for dinner. I’m not so familiar with Shanghai so was hoping that she would choose somewhere easy to find. Well, it turns out that actually that doesn’t matter anymore. WeChat has a map section built-in. You can choose a location (as a pin drop) and send it to a friend. No need to go outside the app and fumble around with Google maps links or screenshots. In addition, if you end up getting confused on arrival, WeChat will allow a live update of your friend’s position. This is great when you are trying to find someone inside a mall for example where maps become limited to only geographical landmarks. It’s also really cool to be able to see where someone is at any given moment.

So within only 24 hours WeChat had trumped all competitors with it’s additional features and ease-of-use. I was totally impressed & so was my friend, the first time China visitor. How wrong I was to assume that life in China would automatically be harder without my regular digital suite- great job WeChat!

More Solutions On Getting Around China

Pop back next month for the next instalment.

Have anything you’d like us to cover on the blog relating to websites, WeChat or anything digital in the PRC? If you liked the article take 30 seconds to leave a comment. Maybe we missed something

China Buying Trends 2016: This Article Could Change Your Entire Business Model For 2016

China buying trends for 2016 - you need to take them more seriously this year,…

If you're website isn’t optimised for mobile then you’re losing sales. Sorry, but it's true.…

A little while back, we published an article titled "Why A Responsive Website Is The…